When the Boeing 737 MAX 8 of Ethiopian Airlines crashed on 10 March last year, China was quick out of the blocks to demand that airlines ground the jet. The Civil Aviation Administration of China sent technical experts to engage with the multi-national team investigating the causes of the disaster, and China’s three main airlines have led calls for Boeing to compensate them for losses due to the grounding.

Aviation accident investigation is an exemplar of international collaboration following a disaster, as nations seek to work constructively to understand the cause and ensure it does not happen again. When we are all exposed to a risk, transparency and cooperation is held up as a universally accepted norm which benefits China as much as any other nation.

This desire to protect the safety and rights of the individual who may suffer adverse outcomes is demonstrably not just a “western” value. In fact Chinese diplomat Pengchun Chang, who played a pivotal role in enshrining individual rights in the Universal Declaration of Human Rights in 1948, drafted what he identified as exemplars of traditional Chinese Confucian thought and culture such as ren (仁) or “benevolence” towards the individual. These values have been demonstrated by the Chinese people throughout history, most recently by the people of Hong Kong but also on mainland China.

As we approach the anniversary of the Tiananmen Square massacre, it is a reminder that the Chinese people, and their traditional culture, value transparency, the ability of an individual to express a view, and accountability from their leaders. For citizens who advocate these values, it has been a hard road since 1949 when the Communist Party took power.

As the relentless pursuit of marxist policies by Mao Zedong, the first Chairman of the Communist Party of China, led to the death of many of his own people by starvation and violence, the titular head of state in the 1960s, Liu Shaoqi, increasingly objected. Conservative estimates suggest that between 30 to 45 million people perished and yet Mao’s response was to brand Liu Shaoqi a ‘traitor’ and ‘capitalist’, having him arrested and tortured until his death.

After Mao’s own death in 1976, hope of reform gradually grew in China. As the cold war came to an end, the Chinese people called more openly for economic and political reforms including transparency and free speech. In 1989, the democracy movement grew in size and influence across hundreds of cities in China. Students, scientists, doctors, peasants, and even some members of the military participated in gatherings and protests. In their response, the Chinese Communist Party showed none of the benevolence so ably championed by P.C. Chang.

This anniversary marks 31 years since the ironically named ‘People’s Liberation Army’ were deployed in Beijing to end the reform movement. To the shock of the Chinese people and the wider world, on the night of June 4, 1989, President Deng Xiapoing ordered tanks and combat troops to clear the protestors from Tiananmen Square. The full death toll of this atrocity will never be known. The official figure is in the hundreds but eye witness accounts point to over a thousand civilians being killed in and around Tiananmen Square, thousands more injured, and even more arbitrarily arrested throughout China in the aftermath of the massacre. 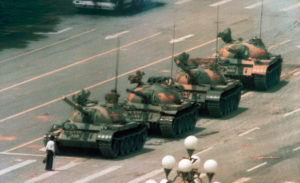 In the days after the army stormed the square and took control of the city, the outrage at what had just occurred was epitomised by a lone Chinese man. Shopping bags in hand, ‘tank man’ stood directly in front of tanks, blocking their movement around Tiananmen Square. The photograph (right) of him standing in non-violent protest, bringing a column of tanks to a halt is a scene now famous everywhere except in China, where the truth of the 1989 massacre is suppressed. Nobody has ever established his identity nor his fate, but he represents the millions of Chinese citizens who want freedom of speech and accountability from their government.

The courage demonstrated by this man is still prevalent in China today. Dr Li Wenliang, a brave doctor in Wuhan, alerted colleagues to the dangers of an emerging disease that we now know as COVID-19. Dr Li was hauled before police and threatened by officials when his concerns became public. Days later when he tragically passed away after contracting the coronavirus, the communist party even tried to censor news of his death.

Acclaimed writer Fang Fang courageously defied official censors, attacks by organised internet trolls, and labels of being a traitor, to keep and eventually publish online a record she called “Wuhan Diary: Dispatches from a quarantined city”.
She writes: “If we don’t investigate who was responsible for such a massive incident, I wonder how the government can ever face its people … For some reason, even up until today, not a single official in Hubei has resigned. I guess they know how to play the game”.

The unfolding disaster that Fang Fang documented has now resulted in the death of hundreds of thousands of people around the world. Just as we do following an aircraft accident, an independent and transparent review to understand how it happened is imperative to ensure a pandemic of this scale this never happens again. Support for such a review is welcome.

P.C. Chang, Liu Shaoqi, ‘tank man’, Dr Li, Fang Fang and many other brave—and not forgotten—Chinese citizens bear witness to the fact that this call for transparency and freedom for people to speak the truth is not an attack on China and its people. It is an opportunity for Beijing to engage with the world community, in accordance with established global norms, as a constructive partner.

Published by The Australian, in print and online.