Under strategies laid out in the Defence White Paper 2016, the Government is meeting the challenges of a complex security environment. 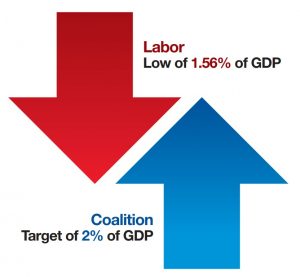 Our fully-costed plan will invest over $200 billion in Australia’s defence capability over the next 10 years.

This is Australia’s biggest-ever peacetime investment in Defence.

By 2020-21, we will have restored Defence investment to 2% of GDP. To build our defence capability, we are maximising the involvement of Australia’s defence industry.

The greatest regeneration in the Navy’s history will see the construction of 57 new vessels (54 already contracted – pictured). 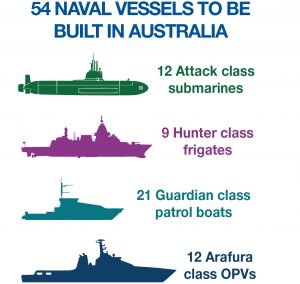 During Labor’s six years in Government from 2007-2012, zero naval vessels were commissioned.

All 57 vessels will be built in Australia, using Australian workers and steel – creating thousands of jobs for decades to come.

Australian build of the Attack class submarines will generate an annual average of around 2800 Australian jobs – 1,100 direct jobs and 1,700 in the supply chain – over the life of the Future Submarine Program.

More than 500 Australian businesses have already pre-qualified to be part of the Hunter class supply chain.

As part of this plan, the building of Digital Next Generation Shipyards with cutting edge technologies are required. Work is expected to run beyond 2048 creating jobs and careers for generations.

Australian industry in South Australia will be directly involved in the highly technical work of designing and integrating the platform and the combat system for the Attack class submarines, further developing Australia’s own capability in these specialised areas.

Activities which will be undertaken principally in South Australia: