We will defend Australia, with the biggest rebuild of the Australian Defence Force (ADF) since the Second World War. 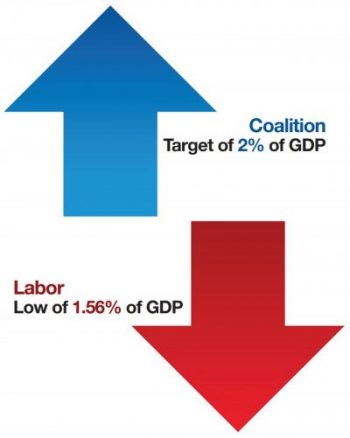 Under strategies laid out in the Defence White Paper 2016, the Government is meeting the challenges of a complex security environment.

Our fully-costed plan will invest over $200 billion in Australia’s defence capability over the next 10 years. This is Australia’s biggest-ever peacetime investment in Defence.

To build and ensure our defence capability, we are creating a sovereign Australian defence industry.

The greatest regeneration in the Navy’s history will see the construction of 54 new vessels.

All 54 vessels will be built in Australia, using Australian workers and steel – creating thousands of jobs for decades to come.

More than 500 Australian businesses have already pre-qualified to be part of the Hunter class supply chain.

The Australian Army is getting new weapons, including rifles, pistols, grenade launchers and mortars, as well as new body armour and night-fighting equipment.

Upgrades to the M1 Abrams Main Battle Tank will ensure our forces have the protection, mobility and firepower they need.

The Air Force will get unprecedented capability to combat future threats through the F-35 Joint Strike Fighter program. The first aircraft arrived in December 2018.

More than 50 Australian companies have shared in more than $1 billion in contracts in the global Joint Strike Fighter program.

In addition to the F-35 Joint Strike fighter, we are improving Air Force capability through investment of $1.4 billion for 7 MQ-4C Triton aircraft, $5.4 billion for 12 P8-A Poseidon aircraft and approximately $400 million for a minimum of 12 armed MQ-9 Reaper drones. The seven Triton aircraft will be housed and sustained at RAAF Base Edinburgh in South Australia creating 70 jobs across SA and the NT.

$11.2 billion has been invested by the Federal Liberal Government across the Veterans’ Affairs portfolio within the Federal Budget 2018/19.

We are ensuring our more than 300,000 veterans and their families receive respect and support, with measures including fairer indexation of defence force pensions at a cost of $1.4 billion, free mental healthcare for all veterans, our veterans-to-work program and a new Australian veterans’ card and lapel pin to provide even more recognition and opportunities.